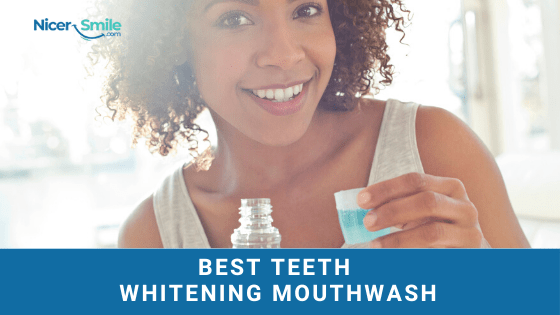 Dental discoloration is very common and can be caused by a number of things, including what we eat, what we drink and how we care for our teeth. Not to mention just your age alone can play a huge factor on the color of your teeth. As we age, so do are teeth. They tend to turn more yellow or brown as we age, and we no longer have the pearly white teeth that we used to have.

If you’re one of the growing 38 million people looking to improve your smile, then here are 5 of the best teeth whitening mouthwashes that you can buy.

The mouthwash contains 15% hydrogen peroxide to accelerate teeth whitening and thanks to its exclusive Whitelock Technology, it also protects teeth from further staining, keeping them white for longer. With a refreshing mint taste, Crest 3D White Luxe Glamorous White not only whiteness teeth and protects them from staining but keeps breath smelling fresh too, making it the perfect product to round off your dental care routine.

Perfect for whitening those hard to reach areas between the teeth, Colgate’s Optic White Whitening Mouthwash also provides conventional mouthwash benefits, helping to kill the germs and bacteria that lead to bad breath and providing a sparkling mint flavor - for best results, use in conjunction with Colgate’s Optic White Toothpaste.

Brushing teeth alone only reaches around 25% of the surfaces within your mouth, leaving large areas uncleaned which can lead to bacteria build-up and bad breath. Using a Fluoride containing mouthwash such as Listerine, on the other hand, helps to clean virtually 100% of your mouth's surfaces, killing more oral bacteria to keep your breath fresher for longer.

In addition to freshening breath, Listerine Healthy White also works on contact to remove tough surface stains, with its unique foaming action getting in between teeth and around the back to remove stains in even the hardest to reach places - strong on stains, gentle on enamel.

ACT Anticavity and Whitening Rinse is another alcohol-free fluoride mouthwash that promises to be tough on teeth stains and mouth bacteria, whilst gentle on tooth surfaces and enamel.

Act has a dye-free and alcohol-free formula, this ACT mouthwash is ideal for those with more sensitive teeth and whitens using a very low percentage of hydrogen peroxide, providing a noticeably white smile in just 7 days.

The strong, fresh mint taste and fluoride formulation work together to kill mouth bacteria and to keep breath fresh, making this mouthwash a great all-rounder for those seeking an alcohol-free mouthwash to improve their oral hygiene and dental whiteness.

Enamel erosion is a common issue when using abrasive whitening agents and can lead to tooth sensitivity. For those worried about their enamel or who often experience sensitive teeth following the use of other whitening mouthwash formulas, Crest’s 3D White Diamond Strong Mouthwash may be the product to try.

This mouthwash promises to provide both a whiter and stronger smile thanks to its gentle foaming action formula, that safely whitens teeth while also restoring weakened tooth enamel.

It is a great product to use to add to your daily routine to help you get the white teeth you have always wanted.

Why Teeth Whitening Mouthwash Is Important

Everyone knows that to maintain good oral hygiene they should brush their teeth, but what they may not know is that brushing alone is unable to reach all areas of their mouths. Even flossing is not as effective as swilling with mouthwash when it comes to cleaning the total area of the mouth, which is why dentists recommend using mouthwash as a part of a healthy daily routine.

Mouthwash can easily penetrate into even the smallest of gaps between the teeth, lifting food debris, killing bacteria that can lead to bad breath, and whitening stains, to leave you with a crisp, clean mouth and noticeably white teeth, even between the gaps. But the benefits of whitening mouthwash don’t stop there.

Most whitening mouthwashes are an essential part of a whitening routine because they contain special chemicals that stop stains from re-adhering to your teeth, meaning that after the stains have been removed via brushing and swilling with the mouthwash solution, new stains from items such as coffee, tea or tobacco are prevented from re-staining your teeth, this is why even after completing a whitening routine, many people choose to continue using whitening mouthwash to protect their smile.

What Should You Look For In Your Whitening Mouthwash?

This is the question of the day. When looking to add a teeth whitening mouthwash to your daily routine you are going to want to pick one that is also going to protect your teeth at the same time.

When buying a teeth whitening mouthwash, besides on picking one off the flavor you prefer, you are going to want to get one with a higher percentage of teeth whitening element. A lot of times this will be a peroxide. The higher the level of peroxide the more  the mouthwash will help with whitening your teeth.

What Whitening Mouthwash is Right for You?

The real question that you should be asking yourself is, how much do you want your mouthwash to whiten your teeth. If you are only going to use a whitening mouthwash and a whitening toothpaste you will want to buy one with a stronger whitening element if you want to achieve the best results.

However, if you are whitening your teeth another way than you will only need to buy a mouthwash to maintain your white teeth. So you will want to buy one with a small percentage of whitening ingredients.

You will probably want to find a mouthwash with a flavor that you enjoy as well.

How Much Should You Spend On Teeth Whitening Mouthwash?

The best thing about teeth whitening mouthwash is that it is not expensive. You should only expect to pay around $5 - $20 a bottle of mouthwash. This is probably one of the cheapest ways to maintain white teeth.

Adding a teeth whitening mouthwash to your daily routine can be a great way to help keep your teeth clean and white. It is great to use it in between teeth whitening sessions or on its own.

We hoped you enjoyed this article on the best teeth whitening mouthwash.